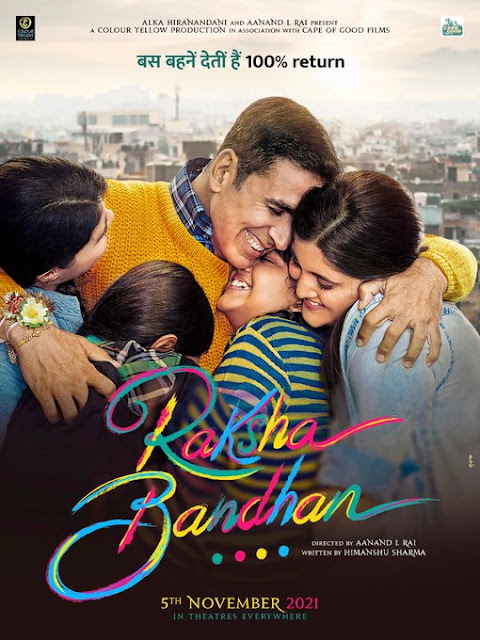 Many films have been made in Bollywood on the unbreakable relationship between brothers and sisters, which people have also liked very much. Now director Anand L. Roy is also making a film on this subject with Akshay Kumar. The best part is that Rakhi is also chosen for the announcement of this film and its title is also Rakshabandhan. The film will be released on 5 November next year.

Akshay Kumar has release the first poster of the film along with announcing RAKSHABANDHAN on Twitter. The tagline of the poster is - BUS BAHANE DETI HAIN 100 PERCENT RETURN.In the poster, Akshay Kumar is seen with a rakhi tied in his hand and his four sisters are hugging him. Everyone looks very happy. The film is produced by Color Yellow Production and Cape of Good Films.

The film is written by Himanshu Sharma, a favorite writer of Anandel Roy. The pair of writer directors have worked in the franchisees of Zero, Ranjhana and Tanu Weds Manu.

Rakshabandhan is Akshay Kumar's second film with Anand L. Roy. Earlier he is working in his film Atrangi Ray, which also stars Dhanush and Sara Ali Khan. Let us know that films from Akshay Kumar's line are on release. Suryavanshi, the film with director Rohit Shetty, is ready for release, just waiting for theaters to open. Lakshmi Bomb will soon be screened on OTT.

By shivraj gujar
Hindi film  is going to be made on another story SEENV KA PAID of senoir journlist & writer Ramkumar Singh. On this, Anarkali of Ara fame Avinas Das will make a film. Das liked the story so much that he not only announced a film on his face book wall, but even said that he would make a film on it and no one should try to look at it. This madness of a film maker, for a story, is enough to fill any writer's chest with pride.Das praised Ramkumar Singh for the story, writing that Rama composed this story with the same linguistic taste that Premchand used to say in his stories, the unique simplicity of the deep grammar. To say this is the story of a village, to say it is a story of the pa…
टिप्पणी पोस्ट करें
और पढ़ें