The shooting of Bunty Aur Babli 2 (#BuntyAurBabli2 2020 Film) has been completed. Producer Aditya Chopra's movie will soon be among the audience. 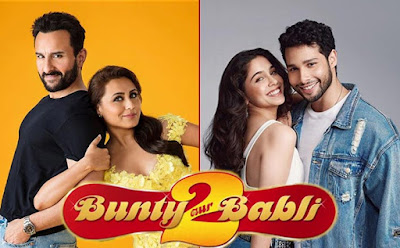 By Shivraj Gujar
The shooting of Bunty Aur Babli 2 (#BuntyAurBabli2 2020 Film) has been completed. Producer Aditya Chopra's movie will soon be among the audience.

Bunty Aur Babli 2 is the sequel to Yash Raj Banner's 2005 film Bunty Aur Babli. The film was a superhit. Directed by Shaad Ali, the film starred Abhishek Bachchan and Rani Mukherjee as Bunty Aur Babli. The chemistry of both was tremendous and they were joined by Big B. Aishwarya Rai had an item song in the film - Kajrare Kajrare Tere Kare Kare Naina,

READ IT ALSO : FIRST FILM IN THE WORLD whose producers guaranteed the return of ticket money if viewers did not like it

the song was written by veteran writer Gulzar. Aishwarya Rai, Abhishek Bachchan and Amitabh Bachchan danced to this song that this song ruled the hearts of people for a long time. Now the sequel of this film is ready as Bunty Aur Babli 2. It has been directed by Varun V Sharma. Music in the film is given by Shankar, Favor, Loy.

Rani Mukherjee is in the role of Babli in Bunty Aur Babli 2, but Bunty has changed. This time, Saif Ali Khan has been replaced by Bunty Abhishek Bachchan. The special thing is that this time Bunty Aur Babli are 2. Bunty Junior and Bunty Senior and Bably Junior and Bably Senior. Sharvari Wagh Siddhant Chaturvedi will be seen in the role of Junior Babli and Junior Bunty. The film will also feature Yashpal Sharma, Mohit Baghel and Dhiren Ahuja in important roles.

The release date of Bunty and Babli 2 is not yet final. Please tell the film was scheduled to release in June, but was postponed due to the covid-19 lockdown. Now this film has been completely completed and it will be interesting to see whether it will be able to create magic like the sequel original film Means First Part.

By shivraj gujar
Hindi film  is going to be made on another story SEENV KA PAID of senoir journlist & writer Ramkumar Singh. On this, Anarkali of Ara fame Avinas Das will make a film. Das liked the story so much that he not only announced a film on his face book wall, but even said that he would make a film on it and no one should try to look at it. This madness of a film maker, for a story, is enough to fill any writer's chest with pride.Das praised Ramkumar Singh for the story, writing that Rama composed this story with the same linguistic taste that Premchand used to say in his stories, the unique simplicity of the deep grammar. To say this is the story of a village, to say it is a story of the pa…
टिप्पणी पोस्ट करें
और पढ़ें